Few fragrances – or objects, for that matter – carry as much symbolism as Chanel No 5. What started as the distillation of Gabrielle Chanel’s spirit has evolved into a cultural icon: it was the scent of Marilyn Monroe, evocative of power and seduction; its instantly recognisable glass bottle was immortalised by Andy Warhol; and it remains a bestseller for the house, despite the ever-changing notes of the fragrance world.

This year marks the 100th anniversary of No 5, and to celebrate this milestone the maison is uniting two of Chanel’s passions with a high-jewellery collection inspired by the fragrance. It is audacious, in true Chanel spirit, yet there’s an interesting synergy between jewels and perfume – both are intimate and intensely personal, both are worn on the skin and often take on the individual scent or patina of the wearer, and both assume a role that is a mix of personal pleasure and attraction.

Patrice Leguéreau, director of the Chanel Fine Jewellery Creation Studio, has dreamt of creating a collection around No 5 since he joined the company in 2009. “I knew that 2021 was an important year, a chance to celebrate the perfume, and so it was a natural move for me to develop the concept of this collection. With each new high-jewellery collection I want to open up the Chanel universe, and the story of No 5 is so rich, so mysterious and fascinating.”

The exact beginnings of No 5 are shrouded in mystery. According to Lisa Chaney’s biography, Coco Chanel: An Intimate Life, Chanel had collaborated with her close friend Misia Sert to create a bottle for an essence that was part cosmetic, part fragrance, and based on a formula apparently made for Catherine de’ Medici, queen consort of France from 1547-59. This foray into fragrance may well have given impetus to Chanel’s idea of creating a signature scent; at the time, it was unusual for couturiers to create fragrances, which was the province of established perfume houses.

Chanel was likely introduced to Ernest Beaux, the Russia-born French perfumer who created No 5, in 1920. For her first fragrance, Chanel, a recidivist rule-breaker, rejected the conventional “soliflore” perfume, which was derived from a single flower. She told Beaux that she wanted “an artificial fragrance like a dress, something crafted. I am a seamstress. I don’t want rose or lily of the valley, I want a composed fragrance.” She also wanted to capture the multilayered complexity of the modern woman. Beaux came up with bouquets of different floral components, concoctions identified by numbers. He is said to have warned Chanel that his use of rare and precious ingredients, particularly jasmine, would be very costly. Coco responded by telling him to add more of them – she wanted to create the most expensive perfume in the world. She was on a mission to revolutionise fragrance, just as she turned fashion and jewellery rules on their head. She wanted a perfume that would accessorise her clothes and express her vision of contemporary luxury.

Among the concoctions, it was number five – composed of 80 ingredients, including vetiver, jasmine, sandalwood and neroli – that stood out. Chanel was madly superstitious: five was her lucky number, an alchemical symbol for the universe and she showed her collections on 5 May (the fifth month), so it was perhaps inevitable that this would be the one. She called it, simply, No 5: the epitome of the low-key elegance she favoured, and also the absolute opposite of conventional fragrances with their exotic names. And, whether it was to do with luck or not, Chanel struck on a winning formula: No 5 is still one of the world’s top-selling perfumes, and it paved the way for the house’s broader fragrance and beauty division, which today accounts for around one third of the house’s $12.27bn annual revenue.

Embarking on his jewellery project, in the summer of 2018, Leguéreau spent time imbibing the story, travelling to Grasse with Olivier Polge, Chanel’s perfumer since 2015, and thinking of ways to translate the fragrance into jewellery. Rather than a literal representation, he wanted to capture its seductive sensuality and the emotions it arouses. He painted free-form images of the bottle, the number five and the golden amber of the perfume, conjuring shapes and forms into floating fluidity. “I really felt free to explore this abstract direction. I didn’t think of jewellery at all at the start, just feelings. The more I entered into the mystery of No 5, the more inspired I became, the more I followed my instinct, interpreting what the fragrance evokes for me. No 5 is such a timeless creation. I wanted to take it into the next century.”

Leguéreau did this with five different “chapters”, each suite of jewels representing a vital element of the No 5 story. The architectural, almost clinical shape of the bottle – which was in stark contrast to the figurative flacons of its day – is a recurring symbol. The stopper, which echoes the octagonal outline of the Place Vendôme, is translated as a graphic motif in diamonds, coloured gemstones and rock crystal. It is also the focal point of the 55.55 necklace, the centrepiece of the collection that is focused on a superlative diamond, D-flawless and type IIa (the purest chemically, so with extraordinary limpidity), weighing precisely 55.55 carats. It is not for sale and will remain in Chanel’s archive.

The number five also becomes a voluptuous, curvaceous feature. The Eternal No 5 choker is composed of a string of diamonds that trail the neck and find the number, which also detaches as a brooch, set jauntily off-centre.

Then there are the flowers, the precious ingredients of the secret formula: jasmine, May rose and ylang ylang. Here, Leguéreau has found the perfect link to the cosmic themes of Chanel’s 1932 diamond collection, which was created against the grain of fashion and during the Great Depression, and represented an about-turn on her own revolutionary advocacy of faux or costume jewellery. The jasmine is likened to a five-pointed star, the May rose corresponds to the moon, and ylang ylang to the sun – a fragrant constellation.

Finally, the most abstract and stylised group evokes the “sillage” – the floating waft of fragrance a woman leaves in her wake – starring the dramatic Diamond Sillage, which resembles a constellation of stars. 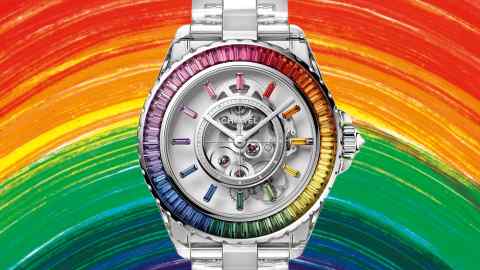 “The colour aspect was very important,” explains Leguéreau. White diamonds pay homage to the 1932 collection, while a palette of golden-toned gems – yellow sapphires, yellow diamonds, gems with nuances of orange – represent the amber perfume. The Golden Burst necklace, with its baroque feel, captures the hue with a near-incandescent array of 350 carats of imperial topaz. Meanwhile, red spinels and rubies nod to another recurring Chanel motif – there was a special Red Edition of No 5, not to mention the house’s famous make-up packaging.

Perhaps most of all Leguéreau wanted to convey the freedom that was so precious to Chanel, which she counted as the ultimate luxury and mark of modernity. And, explains Leguéreau, the essential classicism of the collection is a tribute to this most classic of fragrances, and the fact the maison today still upholds Gabrielle’s values and embodies her spirit. “In Gabrielle Chanel, a true visionary, we have the chance to interpret what she imagined. She knew her style was the future. We continue what she started.”